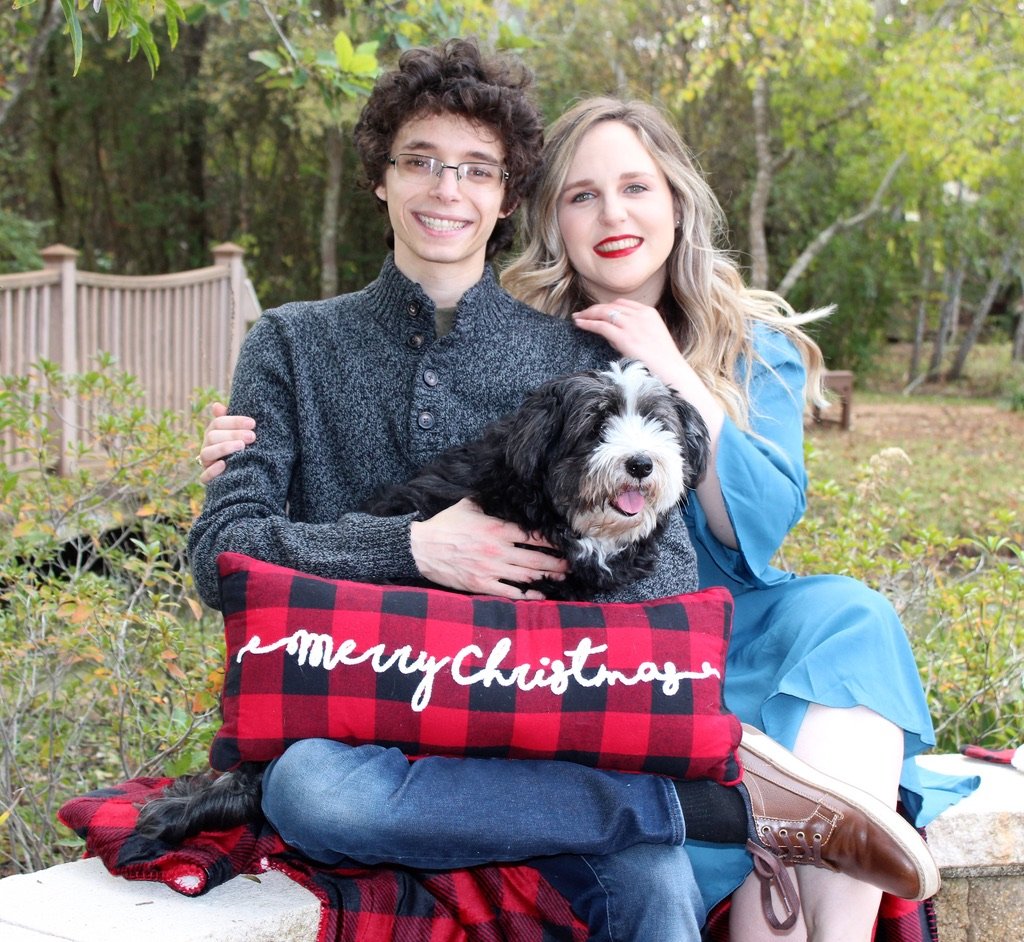 Meet Justin and Sara, an adorable couple that has so generously agreed to share their story with me.  They recently celebrated their first wedding anniversary.  Congratulations to both of them!  The first year of marriage is difficult for most couples.  I can't imagine having the added stress of dealing with a chronic and debilitating disease.  What's so remarkable to me is that they entered into the marriage with a deep maturity, love, and understanding for each other, knowing full well that their life together will be challenging.

Sara is special.  She's bubbly and quick with a laugh, very much like her Mother. When I told her that I admired her compassion and her ability to see Justin for the beautiful person that he is, she just laughed and said that she wishes she could do more - sometimes all she can do is hold his hand and get him a drink of water.  The point is she is there,  holding his hand and getting him that drink of water.  I'm fairly certain there aren't many women her age that possess such an unselfish love.

Justin is only 26 and has been battling MS for the past 8 years. The disease has progressed to the point that he is no longer able to work. When I talked with him the other day, I was amazed that he was so forthcoming and candid. He's so easy to talk to!  He has a positive outlook, accepting whatever each day may bring and so thankful he has Sara. With no known cause and no known cure, it would be easy to become angry and bitter.

Justin describes a good day in terms of energy level.  Having 60% - 75% energy is a good day.  Not being able to get out of bed, dizziness, vertigo, extreme pain, and any other host of symptoms preventing what would be a "normal day" can best be described as a bad day. There are many. Unfortunately, a bad day can last for weeks or months. These are referred to as a relapse which can cause new symptoms to appear or the worsening of old symptoms.  For example, Justin lost his sense of taste for several months.  It gradually returned.  On another occasion, his eyesight in one eye was gone in a matter of days.  When he regained sight in that eye, he lost sight in the other eye for several weeks.  At another time, he literally could not get out of bed for days because the vertigo was so intense.

MS symptoms vary from person to person and are unpredictable. No two individuals experience the same symptoms.  Physicians can calm the symptoms associated with MS to improve the quality of life but the symptoms never go away completely.  As is the case with many prescribed drugs, the medications used to lessen the pain or calm the symptoms often come with side effects and are extremely expensive.  Unfortunately, insurance issues have become a concern for many with MS.  A recent lawsuit filed by 20 U.S. states is seeking to invalidate pre-existing condition protections currently in the Affordable Care Act.  If successful, over 50 million people with pre-existing conditions could lose partial or whole coverage or face significantly higher premiums.  We'll wait and see.

So Sara and Justin, thank you for sharing a bit of your story with me.  I'm so proud of you and so fortunate to have met you.  I look forward to keeping in touch and riding in the MS 150 in your honor.