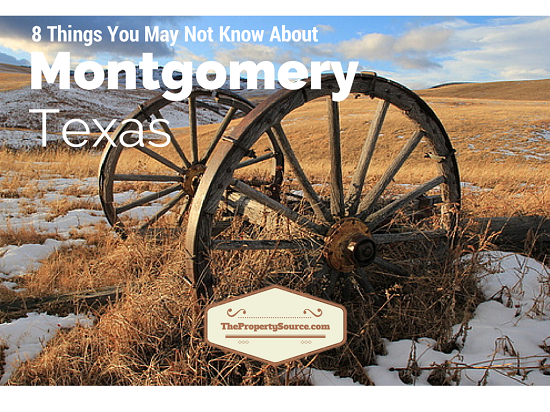 Montgomery, Texas has a history that long predates the surrounding county that shares its name. The sleepy little town may seem quaint and demure, but it is actually one of the oldest towns in Texas. And with anything that’s been around for that length of time, there are bound to be a few stories to tell.

Here are a few lesser known facts about the sleepy little Town of Montgomery, so we can get to know the Texan institution just a little bit better.

The town was named by John Wyatt Moody and W.W. Shepard in 1826. Shepard would come to own the first store in Montgomery and named the city after his home county in Alabama.

7. Montgomery Used to be the County Seat

When the Montgomery County was first established, the town of Montgomery was initially named as the County seat until that honor was transferred to the nearby community of Conroe, TX in 1889.

6. The Town Was a Trade Center

Long established as a crossroads for the area, the town was at one time a trade center for the surrounding farming communities, a stagecoach crossing, railway crossing and telegraph crossing. Currently US route 105 serves as the town’s primary thoroughfare.

Later on, the railway would bypass Montgomery altogether in favor of nearby Conroe. Despite the fact that Montgomery itself was well-established at the time with its own cotton gin and hotels. Ultimately, the county seat would be moved to the city of Conroe as well.

Neighboring Lake Conroe is a man-made lake constructed in 1973 as a result of a record 7-year drought in the area. The joint venture of the city of Houston, the Texas Water Development Board and the San Jacinto River Authority was planned to prevent any future water shortages.

3. Lake Conroe is a Sanctuary for Wild Birds

Lake Conroe has proven itself to be a great bird habitat. The area is a habitat to an amazing variety of bird-life, including Osprey, Great Egret, Great Blue Heron, the Common Loons, American White Pelican, Wood Duck, King Fisher, Blue Bird, and of course, the Bald Eagle.

The lake was infested with the water hydrilla plant that was introduced when the lake was created. The invasive and exotic species had all but taken over the lake and it is still an issue that nature conservationists and officials struggle with to this day. 250 000 grass carp were introduced in the 1980s but they only succeeded in devastating native plant life as well.

1. Montgomery is the Birthplace of the Texas Flag

Montgomery’s greatest claim to fame is perhaps its most lasting contribution. The town is the birthplace of the singular Texas Flag. It was created by the first secretary of state for the then Republic of Texas, Dr. Charles Bellinger Stewart. The flag design was introduced to the Congress of Texas in December of 1838.

Contact us to learn more about homes in Montgomery County

Janet Owens & The Property Source real estate agents will be happy to provide you with more information about Montgomery County real estate, show you properties that have caught your eye, and guide you through the buying process.